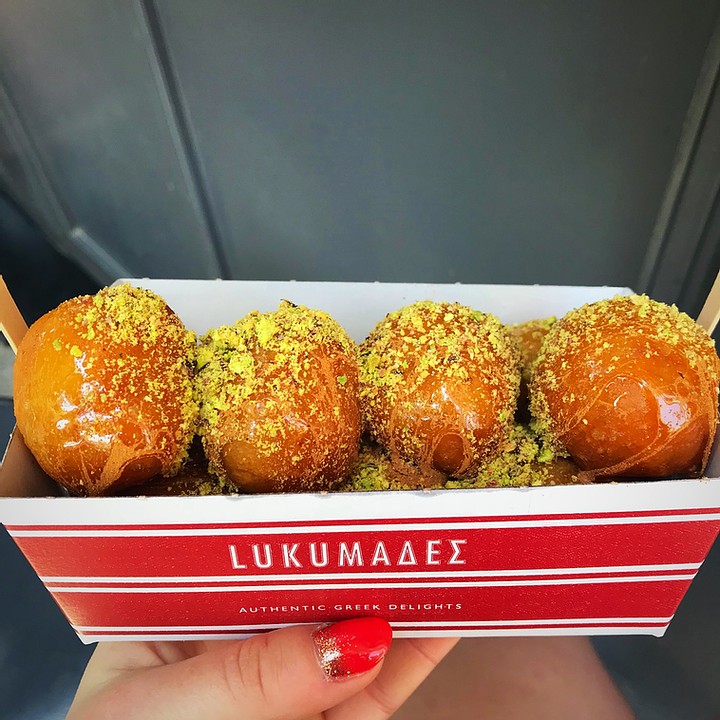 I really wasn’t prepared for how much I loved Athens. I’ve heard so many people bitch about it being dirty, crowded, etc that I was naively thinking I’d just rock up for some ancient architecture and then get the hell out of dodge… well strip me naked and sound the shame bells, because I was entirely wrong. Athens is positively incredible. The locals are the dream, the sun is relentless, the cats are everywhere, and the food is crazy cheap – especially when I’ve already found all of the best deals for you per usual.

I’m going to be mega-controversial by excluding gyros in this post because no matter how hard I try (not very) I just can’t get behind the idea of eating bits of meat shaved off of a rotating meat pillar. Sorry, Greece… I like your souvlaki though.

PS: Athenian snack food that isn’t rotating meat tends to be heavy on the carbs, so don’t ever act like I don’t get fat for you guys trying to scope out the best places. You’re welcome.

Save the best for first? Let me talk to you about deep fried dough balls. They’re called lukumades and they’re basically Greek donut holes but putting them in the donut hole category feels like sacrilege. They’re much crispier on the outside, pillowy soft inside, and less sickeningly sweet. They kind of remind me of sopapillas (you have my deepest sympathies if you led a sopapilla-less childhood). You know how in Greek mythology Zeus put his dick in everything and just created random demi-gods? Zeus put his dick in a donut and lukumades are the resulting donut/sopapilla demi-gods.

Maybe that wasn’t the best analogy but whatever, it’s almost midnight.

A serving of these bad boys will only set you back a couple of euros, with prices going up ever so slightly with each topping you add on. Let me know if you manage to come up with a better combo.

If I could only recreate one meal from all of my recent travels at home, this would be it. Falafellas serves up amazing pita pockets filled with freshly made falafels, chunks of roasted aubergine, salad, yoghurt, and their signature sauce. They’ll ask you if you want it spicy and you better damn well say yes. I was craving this wrap so bad the other day I literally went on a basic girl hunger strike because I didn’t want to eat anything unless it was this wrap. It led to me getting into an hour long argument with a good friend who didn’t think that Deliveroo with planes could be a serious business venture (she’s wrong).

Be warned that by spicy they really do mean spicy. I accidentally touched my eye after eating this (it gets sloppy) and nearly went blind. At €2.80 for a falafel pocket (pictured) or €3.80 for a giant falafel pocket (not pictured, but witnessed and willing to confirm its giant status) this might be one of the cheapest, most filling meals in the city.

Come on, you’ve got to eat Greek yoghurt in Greece. Fresko is located really close to the giant fuck-off hill you have to walk up to get to the Acropolis, so it’s a great place to fuel yourself in the morning. They have all sorts of yoghurt and topping combinations, but the #2 (with walnuts and pine honey) is my fave. It’s also worth trying a yoghurt topped with traditional Greek spoon sweets – which I can only describe as runny jams. The cherry one is ace.

Harry’s Kitchen – Athanasiou Axarlian (I can’t find or remember the number because I’m useless but it’s a tiny street so you’ll find it!)

ZEUS ALMIGHTY has blessed Harry with Athens’ best pie-making skills, but I’ll refrain from talking about Zeus’s raging sex life this time and just stick to the food. Harry’s Kitchen is the tiniest little shopfront run by Harry and his wife. Harry’s wife is the Athenian mum you never had and I love her. Harry sells three different kinds of pies: cheese, spinach and cheese, or meat. I loved the spinach and cheese pie, which was loaded with spinach to make you feel healthy but encased in a mega-buttery flakey crust to remind you why you’re fat.

One of Harry’s pies will only set you back €1, which feels like highway robbery. Harry if you’re reading this – I love your pies and please will you and your wife adopt me.

No write up on cheap eats in Athens would be complete without mentioning koulouri – also known (probably only by me) as breakfast bread. Koulouri is basically a huge ring of dough covered in sesame seeds and then baked. You’ll find it on genuinely every corner of the city in the morning, and Athenians love to pick one up for brekkie en route to work. I straight up LOVE carbs, however I was not convinced the first time I tried this. But then…

One morning, after having way… way too much ouzo, I was hungover and decided to give koulouri another chance. Koulouri saved the day. It’s carby enough to soak up the ouzo nightmares, but plain enough to not make you chunder everywhere after your first bite. Also? It’s only about 50 cents, so you can afford it no matter how much you spent at the bar last night. You can thank me later.